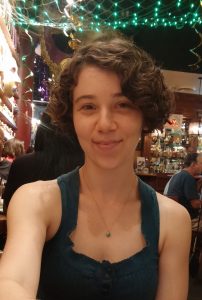 Isadora Richter hit the ground running at First Nonprofit by starting in October of 2014, our busiest time of the year. As the new Underwriting Assistant, Isadora primarily worked renewing contracts for First Nonprofit’s Bonded Service Program members. Her detailed and focused work habits were essential to assisting FNG’s Unemployment Insurance Department prepare comprehensive quotes by scrutinizing all the compulsory data that makes its programs successful.

While Isadora is enjoying her new position and making a huge contribution to the FNG Team, the insurance industry is not her first employment. She earned an English degree from the University of Pittsburgh, and formerly worked as a copywriter and proposal writer. While writing is currently not part of her concentrated daily work, Isadora continues to keep her writing hobby alive by writing fictional short stories and she’s even completed a novella!

The great ability to save nonprofit organizations money which can be directly applied to their nonprofit’s mission was one pleasant revelation that attracted Isadora to her employment with FNG. Once employed she discovered working with the talented, dedicated FNG staff was a joy. “I’ve never worked with such a tight-knit group of people,” she said, “it feels like such a great team!”

Isadora has had an opportunity to live in a variety of different states: New York, New Jersey, Pennsylvania, and Tennessee, and loves to explore. But, for the last five years Illinois has been home and she loves the Windy City because of the many new places she’s discovered and with much more to see. When not out and about exploring the city, Isadora is either in the kitchen baking gourmet goodies – cookies and cupcakes are a specialty – or exploring fiction by creating stories via the written word.