More seniors are volunteering than ever before

More seniors are volunteering than ever before

Nonprofits can always use some extra help to support their cause, and people who are able to volunteer often live a more fulfilled life. Recent research from the Corporation for National and Community Service (CNCS), the nation's federal agency and largest grantmaker for service and volunteering, revealed senior volunteering is at a 10-year high, and the estimated value older Americans brought to nonprofits was nearly $70 billion throughout 2012.

Is volunteering becoming a favorite pastime?
Most seniors are retired and looking for something to do with their time, demonstrating why one in three volunteers is at least 55 years old. That number is only expected to grow in the upcoming years. the study showed a little more than one-quarter of seniors volunteered in 2002, and about 31 percent did so in 2011. By dedicating time to support their favorite nonprofits, seniors can remain active while also giving back to their community. In fact, 72.4 percent volunteer informally by carrying out odd jobs and other tasks around the neighborhood.

"For generations, seniors have been making a powerful impact in their communities, and their service is more important now than ever," said Wendy Spencer, CEO of the CNCS.

Recent disasters call for more volunteer help
The flooding that occurred months ago on the East Coast and the fertilizer plant explosion in West, Texas about four weeks ago are just a couple of reasons why nonprofits are prompted to spring into action and provide assistance to people in need. When these unfortunate disasters occur, nonprofits need volunteers to step up and donate their time and energy to help the those who could use a helping hand.

"With so many people in need, senior volunteers are making a difference in the lives of children, veterans, elderly and disaster survivors," said Spencer. "Leading the way are more than 360,000 Senior Corps (a group put together by the CNCS) volunteers – dedicated Americans using a lifetime of skills and experience to tackle pressing challenges in their communities."

Senior volunteers are also helping themselves
While more than 20 million seniors are volunteering their time and many contributing to nonprofit associations, they are also improving their lives from a health perspective. Volunteering promotes both mental and physical health, and remaining active is just of one the many benefits of volunteering.  Seniors who dedicate their time to a cause can often form new friendships with others in their communities, while also strengthening ties with existing friends and family.

As seniors grow in age, many don't have a lot of opportunities to be social and have fun. Getting older Americans out of the house and volunteering could also do some good some mentally for seniors. By meeting new friends who have the same feelings about a cause, seniors can feel better about themselves, while also doing some work that they care about. 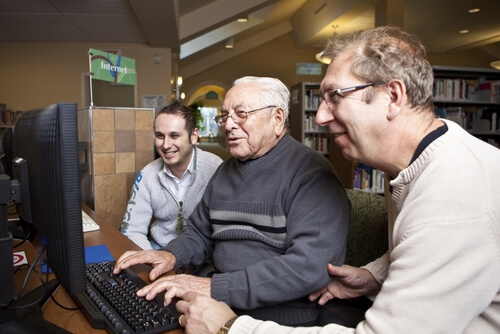