Nonprofits, volunteers step up in time of need

Nonprofits, volunteers step up in time of need

When natural disasters occur, nonprofits and volunteers step up and provide assistance to people in need. Cleaning up debris from Oklahoma's tornado-ravaged neighborhoods is going to take a long time, and as soon as volunteers can get there, they will be deployed all over the area to provide help wherever they are needed.

"[Relief] has to be there almost immediately," Dave Potter, a local volunteer traveling to Oklahoma from Columbus, Ohio, told WCMH, a local NBC affiliate. "You can't wait two or three days to get it there. They want it now. [I'm] that guy that has to go out and get the different supplies, things, equipment, whatever is needed."

Volunteers coming out in full force
As more people learned about the devastation the tornado caused, support for those affected grew across the nation. People offered up their homes to those whose homes were destroyed by the storm, dropped off toiletries and bottled water around the site and bought shovels, gloves and trash bags to begin the massive clean up in Moore, Oklahoma, reported the Los Angeles Times.

"People are just driving up and dropping off all kinds of things," Robyn Mellow, a Red Cross volunteer who staffing a table in the entryway at St. Andrew's United Methodist Church in Oklahoma City, told the newspaper. "They're being very generous."

Nonprofits are doing their part
While many nonprofits collect money for a particular cause, they are able to reshape their focus when a tragedy occurs. With 24 people dead and nearly an entire town erased as a result of the tornado, nonprofits have to step up and be a source of capital that Moore can rely on to aid in its road to recovery. According to The Oklahoman, nonprofits are soliciting donations from their followers and potential contributors to provide relief for victims. The Regional Food Bank of Oklahoma, in partnership with Oklahoma Voluntary Organizations Active in Disaster, is just one the the entities doing its part in the relief efforts. 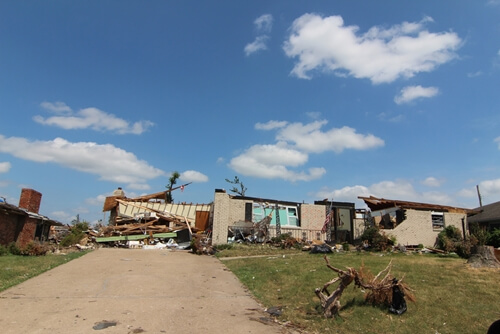