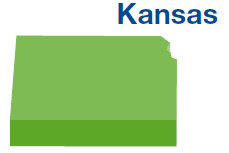 From 2010 to 2012, the Kansas Department of Labor borrowed money from the Federal Unemployment Account in order to pay excess unemployment claims the state’s trust fund could not cover. In order to replenish the fund, factors used in calculation unemployment rates were increased, therefore increasing the average unemployment tax cost per employee from $110 in 2009 to $278 in 2015.